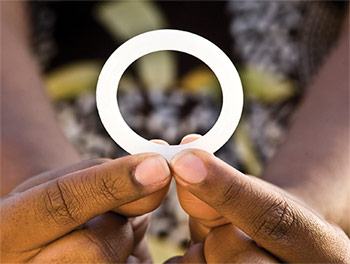 A vaginal ring that releases antiretroviral (ARV) medicine slowly over a month provides women with moderate protection against HIV infection.
One-third fewer women were infected with HIV when using the ring filled with the ARV, dapivirine, than women using a ring without the ARV, according to results from two big trials released on Monday 22 February.
The ring worked best in women over the age of 25, where it protected over half of women from HIV. However, researchers say that many of the younger women did not keep the ring inside their vaginas for the whole month, based on blood tests they conducted to check the level of the ARV in the womens bodies.
The two trials  called Ring and Aspire  involved almost 4 600 women, 70 percent of whom came from trial sites in South Africa.
Today, we have turned a corner in HIV prevention, said Dr Annalene Nel, chief medical officer of International Partnership for Microbicides and study director for The Ring Study.
Potential
We have seen the potential of an ARV ring, and must now work to fully realise this potential for women worldwide, added Nel, speaking from an international AIDS conference in Boston where the results were released.
Dr Jared Baeten from the Aspire study, said the results were a glass half-full moment.
The HIV prevention field for women has struggled in the last few years and at times the glass had seemed almost completely empty, said Baeten. Now, for the first time, we have two trials demonstrating that a female-controlled HIV prevention method can safely help reduce new HIV infections.
Health Minister Dr Aaron Motsoaledi welcomed the results, saying: Every advance in science that empowers women to protect themselves from the virus should be considered for rapid adoption and implementation.
The vaginal ring is made of flexible silicone and slowly releases 25 mg of dapivirine over the course of 28 days. Dapivirine is a potent ARV that blocks the virus at the point of infection, and it was well tolerated by the women who did not report any side effects.
As the dapirvirine ring only offers partial protection from HIV, it would be difficult to market it as a stand-alone product and researchers are meeting next month to decide on their next steps.
One possibility they are considering is combining the ARV with a contraceptive inside the ring.
By Kerry Cullinan, courtesy of Health-e News