MY FIRST TIME... SEEING A GYNAECOLOGIST 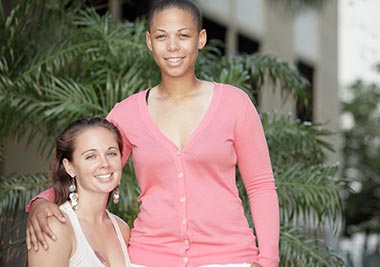 I had been experiencing excruciating abdominal pains a couple of times over a period of two months when I finally thought I should have it checked out.

I knew I had to consult a gynaecologist, but I had no clue of who and where to begin. I had never considered seeing one before. In fact this was going to be my very first time.

I didn't think it was necessary. I mean, after all, my GP had only recommended I use contraceptives to get rid of acne in my early adult years. Other than that she use to joke about how I'm pretty safe from sexually transmitted infections (STIs) as I only slept with women.
That kind of made me feel safe, but only for a while, as I soon was back to see the same doctor for an STI related condition. She was completely shocked and could not understand how it was possible for a lesbian to be exposed to that. After researching it myself, I told my doctor that lesbians are also at risk of STIs, you can get it by sharing sex toys or having sexual contact with a woman who is also having sex with men or women. I mean, who would have thought; and I, the patient, was telling the doctor. Weird.
Anyway, I still had to find a gynaecologist, so I ran straight to my boss who is also a lesbian and was living with a woman at the time, to recommend a doctor. I went specifically to her because I figured if she is living with a woman permanently, then things like gynae checkups should to be a regular feature in her life, not mine. At the time I was single and dating and didn't think these sorts of things necessary at all. I didn't know any better thenhow could I have been so ignorant to my needs as a woman?
On the day of the doctors appointment I didn't know what to expect, it being my first time. But I heard the horror stories of how a metal object would be used during the pap smear session. That alone made me feel a tad uncomfortable.
I arrived at the doctors consulting rooms and joined the queue. If numbers were anything to go by then this doctor (recommended by Boss Lady) must be damn good as swarms of patients were waiting. My turn came quicker than I thought. I walked in wearing those jade coloured apron-like tops they put you in before the consult. To my surprise the doctor was a man. I had only ever imagined visiting a female gynaecologist. Anyway, man or woman, I knew I had to have this checked out.
He mumbled something like, get into the female position. Huh, I replied with a puzzled look on my face, as he gestured toward the stretcher. When he was done with gathering his equipment he showed me how to mount the stretcher facing him, and inserted a longer version of a cotton wool ear bud into my vagina. Why didn't he just say spread your legs (lol)? I am usually a top kind of girl, though quite versatile, so this position was foreign to me.
Even though I felt a little uncomfortable having a huge cotton bud inside my vagina, and another steel device inside me for the pap smear, I knew it was necessary. This was the beginning of a serious relationship with me, my sexual health and my newly-found old, male gynaecologist.
I only found out later that any woman is at risk of developing cervical cancer, lesbian or not. Thankfully nothing was wrong with me, but it so easily could have been something serious.
In my stint of not so serious non-committal relationships, I encountered an STI, the human papilloma virus (HPV), for the first time from two different individuals I was playing with who could have been infected with HPV. Having regular check-ups has now become as essential as breathing to me. It doesn't matter how intrusive having a pap smear to detect any onset of cervical cancer may be, you must have it done.
Oh, and if there is one thing I learnt from the old doc, is how to do a self-exam for lumps on my breasts. I tell you, being a woman who starts to understand how her body works is a full time job, but I love it. I love feeling in control of my body and my health. I guess that is why I like being on top.
This article was written by a contributing writer for Health4Women, a project of the Anova Health Institute NPC. The project is funded by Global Fund to fight AIDS, TB and Malaria through Right to Care. This article represents the contributing writers personal views. Visit our website www.health4women.co.za for more WSW information.