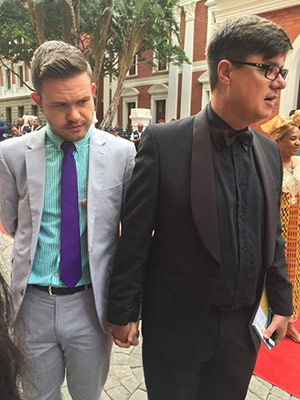 On Thursday, just before the disturbing SONA fiasco, Ollis was spotted arriving outside Parliament proudly hand in hand with boyfriend Adriaan Roets, a lifestyle and entertainment journalist.

The dapper politician wore an all-black suit, in keeping with his DA colleagues, while Roets sported a grey suit, with a stripped light blue shirt.

Its believed that its the first time that a South African MP has attended a SONA function with a same-sex partner.
Ollis, who is now the Shadow Minister for Labour, first came out publicly on Mambaonline.com in 2009, when he was a DA city councillor in Johannesburg.

Along with his growing visibility as a senior MP, Ollis has become a vocal supporter of LGBT rights in Africa.
In 2011, he spoke at the UN in Geneva backing the South African-led landmark resolution on violence and discrimination on the basis of sexual orientation. He also later led the 2011 Joburg Pride Parade through the streets of Johannesburg.
South Africa is unique on the continent in having openly gay serving politicians. In May last year, the DAs Zakhele Mbhele became the first openly gay black male Member of Parliament in Africa.