Obama urged to ban Gambias homophobic president from US

26 January 2015
Human rights groups have called on the Obama administration to take stronger action against the Gambian government in response to its crackdown and persecution of LGBT people. 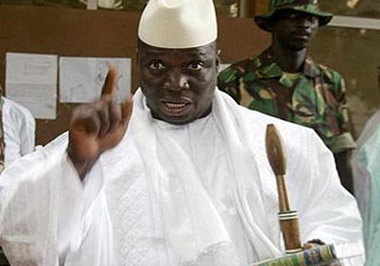 In their letter to President Obama, the 13 organisations stated: It is not too late for the United States to send President Jammeh and his regime a clear and unequivocal message: human rights violations will not be tolerated, and the US government will respond with actions, as well as with strong condemnation.

As we speak, the lives of LGBT Gambians who have been arrested and secretly detained are at risk, and there are no indications that Jammehs brutal crackdown on LGBT people and others is slowing down.

There have been reports, since November, of the arrest, detention and torture of people believed to be LGBT by the Gambian authorities.

In December, the US dropped The Gambia from a major trade agreement because of its human rights abuses, but the groups said that this was not enough.

While removing The Gambias eligibility for the AGOA trade agreement was an important first step, we must increase the pressure on the Gambian government and send an even stronger message to the regime that the United States will hold them accountable for their actions, said Cobb.

The letter calls on the US government to ask The Gambia to account for those individuals it is holding, and to either charge or release them; to bar President Jammeh and his associates from entry to the US; and to consider freezing his assets currently held in the US.

In October 2014, President Jammeh signed a new anti-gay law that created the crime of aggravated homosexuality, which carries punishment of up to life in prison. Homosexuality was already illegal in The Gambia under British colonial era laws and those found guilty of unnatural offences face up to 14 years in prison.

Jammeh has repeatedly attacked LGBT people as vermin, most recently asserting that the evil empire of homosexuals will also go down the dirty drain and garbage of hell He has even threatened to decapitate gays and lesbians.

The letter was signed by US based groups as well as The International Gay and Lesbian Human Rights Commission (IGLHRC).