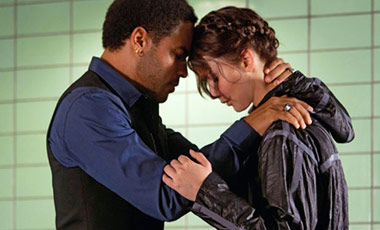 The Hunger Games phenomenon has been likened to the Twilight movies; this is probably because these franchises are based on novels written for the young adult market. But, there's one obvious difference between the two - The Hunger Games is actually a good movie.

Written by American television writer and novelist Suzanne Collins, the first part of her trilogy, The Hunger Games, has sold millions of copies since it was first published in 2008 and has been translated into 26 languages.

Collins co-wrote the screenplay for the film adaptation and was also a co-executive producer. It was smart move; the film raked in $152.5 million in its opening weekend in the U.S.

Set in a post-apocalyptic future, The Hunger Games tells the story of sixteen-year-old Katniss Everdeen who lives in a backward, poverty-stricken district in the nation of Panem.

As penance for a quashed past revolt in which the 12 districts rose up against The Capitol, one boy and one girl from each district must take part in an annual competition that is broadcast to the entire nation.

The unpleasant catch is that the gladiator-style contest is a battle to the death, and there can only be one victor.

When Katniss' sister is selected as a competitor, she volunteers to take her place to save the young girl's life. She is soon shipped off to the high-tech decadent world of The Capitol where she is prepared for her part in the bloodthirsty competition.

While its genre is science fiction, The Hunger Games is completely believable, not to mention genuinely gripping as we root for Katniss survival against the odds.

The film references Big Brother and Mad Max but stands very much on its own thanks to smart storytelling and fantastic performances by a cast headed by Jennifer Lawrence as Katniss. She delivers a strong female character (thankfully, unlike Twilights brain-dead and meek Bella Swan) with charm, heart-wrenching emotion, and a feel for action.

An almost unrecognisable Woody Harrelson stars as a past survivor of the Games who has sunk into alcoholism but has been tasked to mentor Katniss.

There's some eye-candy thanks to Liam Hemsworth who plays Katniss' man-friend back home and Josh Hutcherson as the male counterpart from her district who's been selected to participate with her. In addition to pleasing the eye, they establish characters that we'll want to see more of in the coming films.

Pop star Lenny Kravitz makes an appearance in the role of Cinna, Katniss' stylist for the Games. The character is written as gay and Kravitz plays the part subtly, generating warmth as the only caring person she gets to meet in the city.

A criticism is the over-use of a shaky hand-held camera that suggests the chaos and fear of battle but also confuses the audience and verges on inducing a headache.

The Hunger Games is one of the must-watch films of the year and one that finally meets expectations. "May the odds be ever in your favour."