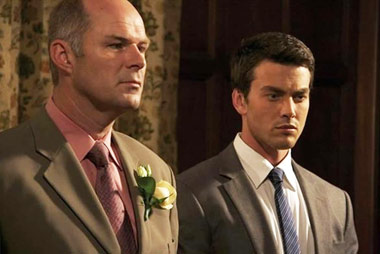 Deon Lotz and Charlie Keegan
The South African film industry is said to be one of the oldest in the world, but I doubt that its early proponents had the award-winning Skoonheid (Beauty) in mind back in those days. Nor will many in the Afrikaans community today appreciate it. This is no Leon Schuster family film outing; its a disturbing, and at times brutal, depiction of the hypocrisy and tragedy of conservative Afrikaner culture. And, it confirms that South African film has come of age.

Francois is a 40-something Afrikaner who lives a double life; he is a family man with two daughters and a successful timber business, yet also has organised secret sexual encounters with other men. He is a hard, typically masculine, almost unfeeling, racist and homophobe and apparently sees no contradiction between his life and his belief system.

It becomes clear, however, that there is indeed conflict behind his emotionless veneer and years of repression are about to boil over. Its sparked off when he is re-introduced to the son of a friend he hasnt seen in years who has grown into a beautiful young man, Christian. Francois becomes increasingly obsessed with the student and soon his life begins to unravel.

Skoonheid  the first-ever Afrikaans film to screen at the Cannes Film Festival  is somewhat European in its style; there are long lingering scenes, often with no dialogue. The very first shot of the film is from Christians perspective as he gazes across the guests at his daughters wedding. The story is told very much through his eyes  someone who has lived parts of his life by looking instead of doing, in order to hide his true nature.

Its a technique thats used throughout the film  Francois, and we the audience, are voyeurs who stare at people who are unaware that they are being watched. It serves to build tension and unease as we grapple with trying to understand Francois while simultaneously being repulsed by him. The technique is effective, but will test those more comfortable with Hollywood fastpaced storytelling.

Deon Lotz is remarkable as Francois. He is prepared to go wherever the character demands  no matter how dark or sordid. He faces the challenge of conveying a repressed inner world that is rarely visible  and he does it quietly and powerfully. Charlie Keegans Christian doesnt have a great deal to do in much of the film, other than look pretty (which he does rather well), but hes a screen natural and shows in the latter part of the film that he too is emotionally fearless when he needs to be.

I noticed a few comments on Facebook by gay viewers of the film who found it offensive because of what they saw as its negative depiction of homosexuality, but they miss the point completely. Skoonheid is not a film about gay people  its about what happens when peoples true natures are repressed. 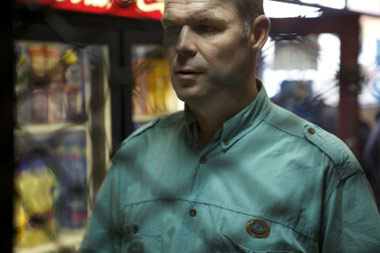 Deon Lotz
A scene in which Francois watches a young gay couple  generations and worlds away - displaying affection towards each other at the local Spur is telling and deeply moving. It seems as if he realises that this is something that he can never have, and, perhaps for the first time, he desires it without disgust or revulsion.

Director Oliver Hermanus has said that he hopes that Skoonheid will be embraced by local audiences but I fear that is unlikely to happen. Its simply too challenging, too real and too truthful for most. And we South Africans  gay and straight  are not fond of seeing ourselves truthfully. Its a pity because Skoonheid is probably the best South African film Ive seen.

Skoonheid is now on circuit in South Africa. Read our interview with director Oliver Hermanus and watch the trailer below.