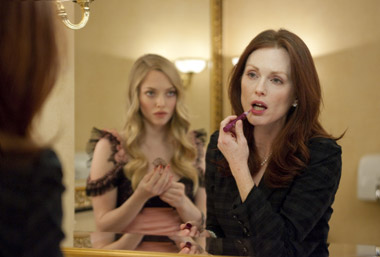 Mama Mia Amanda Seyfried, you have grown up! From sweet, carefree Sophie dancing and singing along the idyllic beaches of Greeces Kalokairi Island to the manipulative, sadistic life of a high-end Toronto call girl, Seyfried takes on the character of Chloe with relish.

Based on the 2003 French film Nathalie, Chloe tells the story of Dr. Catherine Stewart (Julianne Moore) a gynaecologist intrigued by the activities of a young woman she watches regularly visiting the hotel downstairs from her office. Catherine, cemented in a seemingly blissful, fairytale marriage to Professor David Stewart (Liam Neeson), admires exotic Chloe from the safety of her glass tower. However, Catherines once intimate and fulfilling relationship with David is starting to show the cracks, revealing a sexless and disconnected relationship with her husband.

Events create a hot-bed of insecurity and suspicion that he may be cheating and Catherine decides to test Davids fidelity. She hires Chloe to charm the older man into an affair, reporting every detail of the encounters back to her.

Initially the tales of sex with David upset Catherine but soon she begins to find the stories a turn-on. The hurt and pain inflicted by her cheating husband quickly turns to excitement and confusion, leading to a kiss between the two women - and Catherine is suddenly seduced by Chloe.

The story soon takes a dark turn, ultimately unravelling everything you think youve learned about these three characters.

And windows play a huge part in this film both in a people in glass houses and in a window to your soul sort of way. Watch out for the many subtle undertones in this film from the type of flowers used in the green house to the frozen Canadian locations symbolic of the relationship between the trio.

The sex scenes, and there is a lot of nudity and sexual situations, are convincing - plus it was fantastic to see a big name star like Moore being lead astray by another woman.

What disturbed me more than Chloe being portrayed as an unstable lesbian (typical!) and Catherine as a coward (disappointing) for choosing a loveless marriage over a passionate affair was the age of the characters. The scenes between a very young, doe-eyed Seyfried and a much older Neeson made me downright uncomfortable, which Im sure is the effect it was meant to have.

You expect nothing less than award-winning acting when Moore is in a film and thats exactly what you get from her and the rest of the cast. Seyfrieds performance as Chloe elevates her to a superstar. Neeson, while a footnote in this movie, is remarkable  especially considering that he made this film shortly after the unexpected death of his wife Natasha Richardson.

Chloe is now on circuit at Cinema Noveau theatres.