I Love You Phillip Morris

REVIEW: I LOVE YOU PHILLIP MORRIS 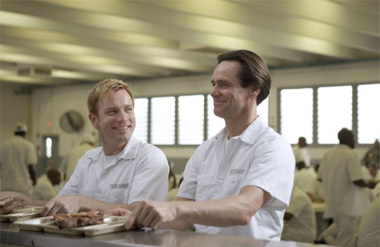 When I first heard that Jim Carrey and Ewan McGregor would be starring in a romantic comedy about two prison inmates who fall in love I struggled to visualise what that film would look like. In Hollywood they call it a high concept idea - but it's one that I couldn't wrap my head around.

Big screen stars do not appear in gay romantic comedies. It just doesn't happen. They may take on heroic or noble dramatic gay roles to show off their acting chops, but not gay romcoms that won't win them any Oscars.

It's that kind of thinking (and internalised homophobia) that has probably led in part to I Love You Phillip Morris failing to make its mark in cinemas. Audiences don't like ideas that they can't understand or can't associate with something else they've seen before.

The result has been ongoing delays in its release in the US, with distributors - here and abroad - eager to hide the film's gay subject matter in trailers and promotions. They don't know how to sell this movie. I watched a television spot for the film tonight and you'd never know that it's a story about two men in love.

And it's a damn tragedy, because I Love You Phillip Morris is one of the funniest and most joyfully entertaining films I've seen in a long time.

Remarkably, this outlandish tale is based on a true story, as originally chronicled by investigative reporter Steve McVicker.

Steven Russell (Jim Carrey) leads an average heterosexual suburban life until he realises its all a sham and announces to his wife and the world that he is gay.

Convinced that being gay means a complete change in lifestyle to accommodate the finer things in life ("Being gay is really expensive") he soon becomes a charismatic conman in order to pay for his new tastes and good-looking boyfriends.

Of course, it all comes crashing down and he lands up in jail. Its here where he meets the soft-spoken Phillip Morris (Ewan McGregor). And thus begins an extraordinary romance that leads to astonishing jail-breaks and insane cons that beggar belief.

Both Carrey and McGregor give their all in these roles and despite the crazy scenarios they find themselves in they are entirely believable as two gay men in love. All the comedy and madcap shenanigans aside, this story has an emotional heart and it beats strongly thanks to these two actors.

The comedy is sharp, quick and often dark in tone. In the tradition of the noble but misguided anti-hero, the film never judges the illegal actions of the characters who seem to live in an amoral world of their own. I Love You Phillip Morris revels in the obsessive madness and glee of doing anything and everything for love.

Writers/Directors Glenn Ficarra and John Requa (the team behind Bad Santa) have crafted what some might call a "post-gay" film. That's where the gay subject matter is not what the film's about. It's not a coming out story or the journey of someone grappling with being gay in a homophobic world - it's an incredible story about two men who happen to be in love.

Sadly, in the real world most audiences will probably give I Love You Phillip Morris a skip because of its gay characters. It's a strange state of affairs: one in which a solemn drama about gay struggle has a better chance of pulling an audience than a heart-warming and humorous classic featuring two gay men.