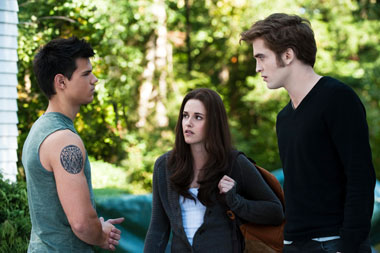 Happily, in the third Twilight film, we have something akin to a plot and things finally start to move forward; albeit at a glacial pace.

We begin where we left off in the previous Twilight outing with Bella demanding that Edward turn her into a vampire, while he insists that they first marry. On the sidelines, the perpetually shirtless Jacob is determined to stop her from losing her humanity and to ultimately win her heart.

Amidst all this longing, swooning and inner turmoil, the towns vampires and werewolves are concerned about a number of mysterious murders in nearby Seattle and are forced into an uneasy alliance to stop an impending invasion.

Eclipse is all about sex (or at least the concept of sex). Bella is set on losing her virginity and, while Jacob appears eager to oblige, Edward wants to do the right thing and wait until theyve tied the knot. Apart from the werewolves and vampires, this is just another high school flick that seems to have somehow connected with people of all ages.

The cast generally does the best it can with Stephenie Meyer's weak source material and the trite dialogue, and Stewart is thankfully less annoyingly sullen than before. The leads manage to maintain the spark between them but this time round theres also a subtle but definite sense of homoerotic chemistry between the two male characters.

An almost-Brokeback Mountain tent scene had me wishing Edward and Jacob would just throw the permanently indecisive Bella out into the snow and get into that sleeping bag together to take their male bonding to the next level.

For the first time we get to know more about some of the minor vampire characters through flashbacks about how they were turned into blood suckers. This adds interest and a level of depth to roles that were previously little more than background modelling.

Eclipse also features more action than before, including a pretty competent battle scene, although the werewolves remain inexplicably unrealistic in their rendering.

The Twilight saga reflects an almost Victorian ideal of innocent and chaste love; with interest emerging from the tension between unbearable desire and constant holding back. How long this can be drawn out in these films remains to be seen.

Thankfully Eclipse moves in the right direction and finally hints that there may possibly be a satisfying climax and release at the end of this long-winded tale.