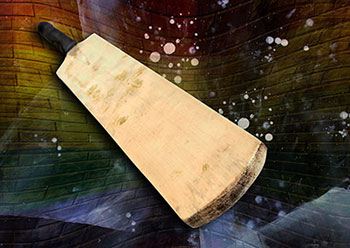 Sally*, a 24-year-old activist from Pretoria, is dedicated to combating the stigma of HIV and the scourge of hate crimes.
With her focus on helping others, this confident and openly-lesbian woman didnt expect to herself become a victim of violent hate because of her sexual orientation.
On Saturday 28 January, Sally was returning to her Sunnyside flat from a night out. She reached the gate of the apartment complex, so very close to home, when the men struck.
Bang! There was a cricket bat to the back of my head, she remembers. Out of nowhere there were six guys. I fell down when they hit me and I rolled on the ground. I couldnt see anything for a few minutes.
I couldnt understand what was going on. Everything was going round and round. Your mind does things... I didnt know that it was a cricket bat at first. They were hitting my face countless times - until they broke my front teeth. It was horrific.
I tried to look at their faces but when I looked at one of them I got a cricket bat in my mouth. Three of them were doing the kicking and punching while the others were doing the talking.
As the men assaulted the young woman they made it clear that Sally had been targeted because of her identity. They said, You are always walking with beautiful girls. You are taking our girls! They told me that I was trying to make myself a man and that being a lesbian is demonic, she recounts.
The men also revealed that they had seen her testing clients for HIV at a nearby park, which she does as part of her job. These people knew me, but I couldnt see them because it was dark. I didn't even recognise the voices.
Sally was saved by the caretaker of the flat complex. He heard the commotion and ran out to see what was happening, scaring off the group of men. Dazed, bloody and in pain, she was helped into her home. She reported the attack to the police and has since received medical and dental treatment, but remains rattled by the experience.
My gums are still swollen. Im getting there, slowly but surely. I had a counselling session and I'm still going to go for trauma counselling. I havent been out the flat. Ive been trying to think of their faces but I cant. Sometimes I can hear their voices. I am not an angry person but lately I snap a lot.
Frighteningly, Sally points out that the men know exactly who she is and where she lives but she still has no idea who they are. These guys are out there. When I just walk past a man I get jumpy. My flat is next to a small park and every time when I go past there from work, when I see men laughing, I think those might be the guys.
She notes that the day after her attack the Grace Bible Church became embroiled in controversy when a guest evangelist preached that homosexuality is sinful and unnatural.
He was preaching hate. He is encouraging people to attack us more. If they listened to that sermon [the men] would not have felt bad about what they did to me.
Sally isnt expecting much of a response from the police, echoing results from a recent study that revealed that 88% of Lesbian, Gay, Bisexual and Transgender (LGBT) victims of discrimination and hate crimes didnt report the incidents. While she has filed a report, she is still waiting for a case number.
It's been more than a week now. I dont know if they are taking it seriously or if they dont care. I am losing hope. They are not following up. When I ask for progress they tell me that I first need to have a case number.
She still believes that it is important to report cases and to put pressure on the authorities to take action. I never thought I would experience such a thing. I do hate crimes work and I thought I would be safe. Ive asked myself what Ive done wrong.
Is it because Im too exposed? At times Ive blamed it on what I do. But I realised that this is what I love doing and it helps others who are going though things worse than I did.
According to OUTs report, Hate Crimes against Lesbian, Gay, Bisexual and Transgender (LGBT) People in South Africa, 2016, more than half (55%) of LGBT South Africans fear they will experience discrimination or violence due to their sexual orientation or gender identity.
These fears are well founded: 44% of those surveyed said they had indeed experienced discrimination in their everyday life, due to their LGBT status, in the previous two years.
People should not be discouraged to report incidents of hate crimes and discrimination, says Lerato Phalakatshela, Hate Crimes Manager at OUT and Spokesperson for the Love Not Hate campaign.
It remains important to have cases recorded or documented, even if it is not with the police, so that we can continue to ascertain the scale of the problem in South Africa. If victims feel more comfortable reporting to a supportive organisation, they can contact one of the Love Not Hate partners, who can be found at www.lovenothate.org.za.
Sally is adamant that she wont stop working for change and says that the horrific experience has only made her more passionate about her cause. I am going to be in the forefront of anything concerning hate crimes. I wont be scared to point out that homophobia is wrong and needs to be stamped out, she says.
I wont hide myself. I need them to know. I wont let them silence me, or they will feel that they have won. Even if it means that I have to be in danger, I wont let people bully us.
* Name has been changed to protect the survivor from further victimisation.