South Africans are progressive prudes when it comes to LGBTI people

A ground-breaking national study has concluded that more than half a million people in South Africa identify as being gay, lesbian, bisexual or gender non-conforming in some way.
The report has also found that while most South Africans believe that homosexuality is immoral, gay people should be protected by the law. Alarmingly, violent behaviour against our community remains a reality.
Conducted by the Human Sciences Research Council (HSRC) on behalf of The Other Foundation, the report is said to be the first statistically sound, nationally representative data on LGBT issues in Africa.
There is a general belief that people in Africa are deeply homophobic and unaccepting of gender diversities. But the truth is that, up to now, we havent really known what the African public really thinks because hardly any work has been done to gather and analyse the views of the public in a structured way in Africa, said Neville Gabriel, chief executive officer of the Other Foundation.
The data is essential to craft our own African narrative about the lived realities of homosexual and bisexual women and men, as well as transgender and intersex people. We hope to soon expand this survey to other countries in our region, he added.
The report is named Progressive Prudes because it shows that the majority of South Africans think that gay and lesbian people should have the same human rights protections as other people and should be part of the cultures and traditions of South Africa  even though the majority also think that sex between people of the same sex is morally wrong.
According to the study, 530,000 adult South African women and men, across all population groups, living in both rural and urban areas, and across all age groups, identify themselves as homosexual, bisexual, or gender non-conforming.
This equates to 1.4 percent of the total population. The researchers said this is within the range observed in other countries around the world. Studies from several countries, conducted at various times, have produced a statistical range of 1.2 to 6.8 percent of the adult population identifying as LGBT, with many countries clustered around the 2 percent level. 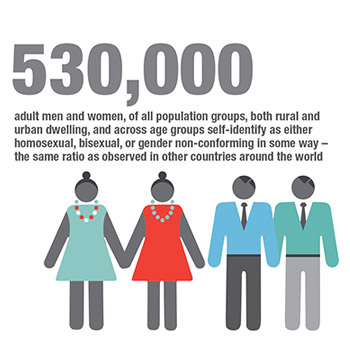 The study noted that this is lower than the commonly cited statistics of between 5 and 10 percent of the population being homosexual, but acknowledged that some people may have been reluctant to disclose their identity to the person who interviewed them. (The survey was conducted via one-on-one interviews in private.)
The researchers also pointed out that there were no questions regarding sexual attraction (have you ever been attracted to someone of the same sex?) or behaviour (have you had a sexual experience with someone of the same sex?). When survey questions are asked in this way [instead of only about self-identification] the response rate tends be significantly higher, they said.
This means that the survey does not address, for example, men who have sex with men (MSM) who may not identify as gay or bisexual, and may in fact identify themselves as heterosexual.
The survey also concluded that just over three million South Africans present themselves in public (dress and act) in a gender non-conforming manner: around 430 thousand South African men dress and act in strongly and exclusively feminine ways; and nearly two million eight hundred thousand South African women dress in strongly and exclusively masculine ways. This suggests that significant numbers of women in particular, but also men, are breaking gender norms in South Africa.
Well over half the population (55 percent) say that they will accept a gay family member but only one in four people (27 percent) report having a friend or family member whom they know is homosexual.
The vast majority (8 out of every 10 people) have not, nor would they ever consider, verbally or physically abusing someone who was gender non-conforming.
Disturbingly, though, about half a million (450,000) South Africans over the prior 12 months, have physically harmed women who dressed and behaved like men in public, and 240,000 have beaten up men who dressed and behaved like women.
Moderately religious South Africans are the most tolerant of gay and lesbian people, even when compared to the least religious.
Since 2012 there has been a tenfold increase of South Africans who strongly agree with allowing same-sex marriage. The proportion of people strongly disagreeing dropped by half  from 48.5 percent then, to 23.4 percent now.
The results convey the considerable effort still required to ensure that society understands and respects the rights of LGBT people in the country, said Crain Soudien, chief executive officer of the HSRC. A sizable share of South Africans for instance, continues to express intolerant views of homosexual sex and gender non-conformity. In addition, self-reported levels of past and potential future prejudice, abuse and violence against gay and lesbian people is also a source of concern.
At the same time, the study offers some encouraging signs, he said. Such knowledge serves as an important basis for further promoting social justice by enriching and shaping social dialogue, advocacy, and policy interventions. 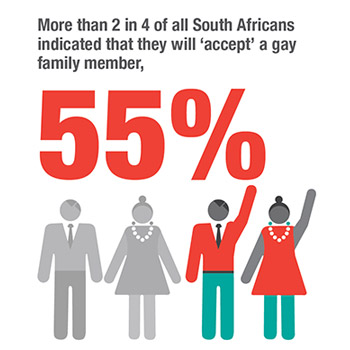 The survey was commissioned by the Other Foundation and undertaken by the Human Sciences Research Council (HSRC) as part of the South African Social Attitudes Survey conducted at the end of 2015. More than 3,000 South Africans were interviewed in their choice of eight of South Africas most widely spoken languages.
The Other Foundation released the results of the survey ahead of World Suicide Prevention Day on 10 September 2016 to remind the public that tens of thousands of gay, lesbian, and bisexual women and men, and intersex and transgender people, take their lives as a result of social attitudes that fuel hatred, social exclusion, and violence towards homosexual and gender non-conforming people  especially those who are most vulnerable as a result of other social and economic injustices.
A study by OUT LGBT Well-being in Pretoria found that 31% of LGBTI people think about suicide and 21% actually attempt suicide in South Africa  well above the national average for the general population.
The Other Foundation has released the report with a call to religious communities, trade unions, business executives, traditional leaders, NGOs, government agencies, parents and families of LGBTI people to intensify efforts to build a just and caring society, free from discrimination, exclusion and harm towards LGBTI people and all other social groups who are seen as other.